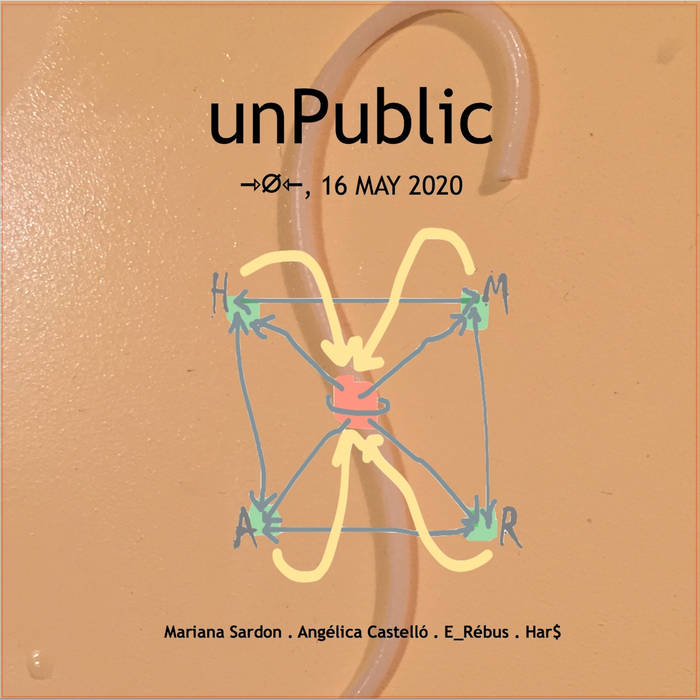 " Each of these seven tracks is a different 'projection' of the 68th unPublic, an online con-fine event on Saturday May 16th, connecting Mariana Sardon in Vila do Conde (Portugal), Angélica Castelló in Vienna (Austria), Emmanuel Rébus in Bures-sur-Yvette (France) and Harold Schellinx in Montreuil (France), who, roughly between 16h10 and 16h45 (paris time), shared a 'voice room' in the VoIP application Discord. Each of the four participants in their physical location were outside (on their balcony, terrace, in their garden ...), and played back micro- and other cassette tapes on dictaphones, for their computer's microphone.

The Discord VoIP application transmitted that signal for the other participants (computers) to hear. So, in some sense each one is playing along to/with the others. The Discord application, however is an active and —interestingly— unpredictable participant in the event.
First, through the very 'lo fi' rendering provided by the lossy audio coding format that it uses (Opus, specifically designed for optimising the coding and transmission of speech) and the low (monophonic) bit rate (like for uP66 and uP67, also for uP68 the bitrate of the Discord server used was 64 kbps).
Second, because of the, from a user's point of (h)ear, not or only little controllable filtering and gating that is being applied to the signals that are going in and out of a 'voice room', which —as the recordings witness— regularly appears to select only one among several incoming signals, and blocks the others.
Last, but not least, it is due to the varying latency effects, including those of local buffering and (it is a guess) the echo cancelation algorithm, that each of the distant local events has its own 'composition', including -what is particularly fascinating- its very own timeline, that (again, witnessed by the recordings) allows but for approximate synchronisation (in constant need of adjustment) with the others.

It is in this, pretty precise sense, that each time we share sounds in Discord, we do not create a single 'unified' sonic event. We create a set of disparate 'please-keep-your-distance' sonic assemblages, each of which is a different projection of a something that actually and simply is not. Indeed. It is like the woman who in one of the dictaphone recordings is repeatedly shouting: "Tu mens !" ... "You lie!"

Each of the participants also this time made a local recording, using a digital recorder placed near the computer used to receive and send her/his signals.
A fifth computer acted as the 'third man', only receiving the signals of the four others, and not sending. Also this (monophonic, 64kbps) signal was recorded. It is the 'pivot' in this uP's track list ('untitled').
Each of the other tracks is a balanced (approximate) synchronisation of one of the 6 possible different combinations of two that can be made from four local recordings.

Every one of the seven recordings lasts, almost precisely, 31 minutes. "